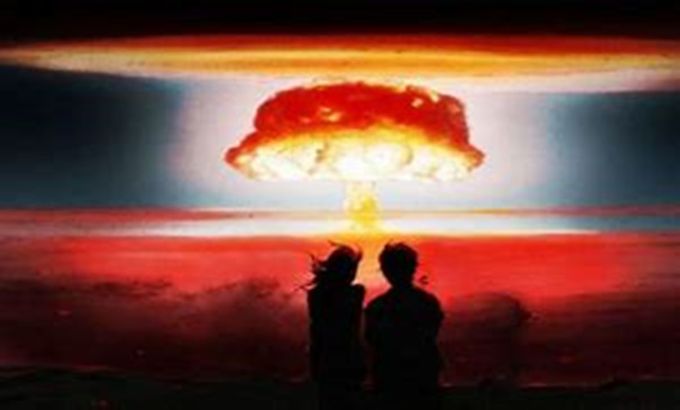 With apologies to Chuck Lorre and Warner Bros.

This started out as a suggestion that the Ukraine situation highlighted the need for Scotland to be free of the warmongering tossers in Westminster. But then we had this from the ‘supposedly’ independence supporting Ian Blackford.

Is there any event that the SNP won’t use as an excuse to delay progress towards independence?

Let’s get back to the original story.

There’s aiways lots of talk about the proximity of the UK nuclear bases to Scotland’s largest city, Glasgow, not to mention all the places in between such as Helensburgh, Dumbarton and Clydebank. Clydebank, of course, has already experienced the early 1940s equivalent of a nuclear attack with the Clydebank blitz extending over two nights in March 1941. Over 1000 bombs and over 2000 incendiaries were dropped, killing and seriously wounding over 1100 people out of a population of about 50,000 and virtually destroying the town, with only 8 of 12,000 houses remaining undamaged. 439 Luftwaffe bombers were involved in the raids.

However, with the advent of the real nuclear era in 1945, things changed. Only one US bomber was involved in the attack on Hiroshima and only one bomb was dropped. Out of a population of about 350,000, about 75,000 were killed immediately, but the effects of the radiation created by nuclear explosion meant that number doubled in the next 2-3 months and estimates over the longer term have put the number of deaths caused by the attack as high as 330,000.

Why am I telling you all this?

Firstly, to show the difference between conventional war and nuclear war. In conventional war, you could be unlucky and have a bomb drop close enough to cause considerable injury, or perhaps even death. In a nuclear war, you won’t escape. If you don’t get killed by the blast or the likely firestorm which follows, you’re likely to suffer a slower lingering death caused by exposure to the radiation.

The damage to Hiroshima was caused by a 16 kiloton (thousand tons of TNT) bomb. This is as nothing compared to the power of present-day weapons, which can range up to 50 megatons (million tons of TNT) and can have several independently targetted warheads, some as many as 10, allowing one missile to distribute destruction over an area several hundred miles across.

To put it in a Scottish context, one missile could carry warheads aimed at Faslane, Glasgow, Edinburgh, Perth, Dundee, Aberdeen and Dumfries, and still have a few left for other targets. Scotland would just cease to exist. To take just one example of possible contaminants, the half-life of Uranium-235 is 700 million years. To put it another way, it takes 700 million years before it becomes half as dangerous. Scotland could become just a bigger example of Gruinard, an entire Scottish island contaminated by UK biological weapons testing and uninhabitable for years.

Secondly, recent events in Ukraine have brought the possibility of nuclear war back into the media, though hopefully not really any more likely. Boris Johnson and other members of his cabinet have been warning of the threat Russia poses and the possibility of a nuclear attack. To make matters worse, members of the Scottish Government seem to be adopting a similar line to Westminster. Of course, we in Scotland are lucky enough to have a nuclear weapons base just 25 miles from the centre of Glasgow, a base which would be a prime target should a European war break out.

This is the risk politicians and the media are taking when they ramp up pro-war rhetoric. Of course, they are betting that it won’t come to that. They are betting your life on it. They are encouraging war on a more limited scale. Limited in scale and limited to someone else’s country. Limited so no one important dies, just a few hundred soldiers and a a few thousand (or tens of thousands) civilians (or foreigners as they are better known).

But why? The tiny amount of political influence gained for the cost of a war reminds me of many of the actions in the Great War of 1914-18, when Allied generals (those allegedly on our side) believed that a few dozen yards gained were worth the cost of hundreds, even thousands, of human lives, even when they knew that the ground would likely be lost again in the next Central Powers (the other side) attack, also at the cost of hundreds or thousands of lives.

So, if it’s not political influence, what’s to be gained? The obvious answer is of course money. War requires weapons and weapons require money and the money goes to those whose cash bankrolled the election of the politician. So a win-win situation for all the important people. And that’s all that counts, isn’t it?

Of course, war is not the only way to cause nuclear explosions. I’m sure everyone remembers Chernobyl and Fukushima, neither of which were caused by war. They were accidents. Accidents can happen at any time, Accidents can be small or large. Larger accidents tend to make news, but smaller ones don’t. No one hears about the smaller accidents until one causes a problem which escalates and suddenly becomes a bigger accident.

A report issued in 2018 told us that in the period from 2006, there had been over 500 recorded accidents at Faslane, half of them from 2015. So from 2015, 250 accidents. That’s about 7 accidents a month, or about one every four days, each with the potential to escalate to something more troubling.

I don’t know how many nuclear weapons are kept at Faslane, probably nothing like 50 megatons in total, but enough to make a pretty big explosion should someone press the wrong button – accidentally.

So let’s get moving on independence, which seems to be the only way we can tell Westminster to get their stuff out of (our) harms way. Obviously, it would be better if they were all gone, but moving them to Plymouth (or somewhere even further away) would be a good start.

What do you think their priority is?

BEAT THE CENSORS
Many Facebook sites are increasingly censoring bloggers like myself who can be critical of the actions of the SNP and the Scottish Government. They are attempting to prevent bloggers from getting their message out, so we have to depend on readers sharing the blog posts. If you liked this post or others I have written, please share this and take out a free subscription by clicking the follow button on the home page or on the posts. You will then be notified by email of any new posts on the blog. Thank you.